And that is just what we did last Saturday. We packed up lots of water (and balls for Roxy) into Ray the Rav4 and headed up North to Ras-al-Khaimah to seek out some dog-friendly beaches. 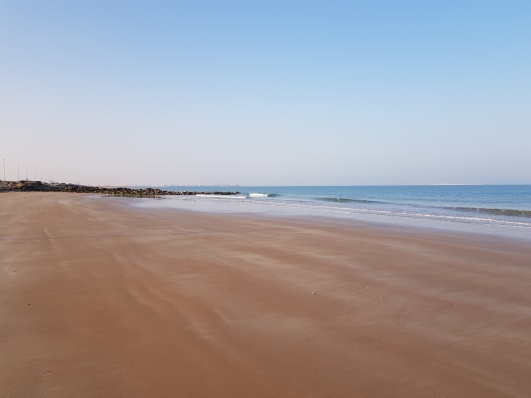 It takes roughly an hour and a half to get to RAK, driving through Ajman, Sharjah and UAQ. If you get up early the roads are pretty quiet, nowhere in the UAE really gets going before 10am on a weekend. I can’t say its the most exciting of drives, I imagine if you had to do it every day it would be akin to the M6 through Birmingham. However, the scenery is fascinating, especially as it is all new to us.

It’s fairly obvious when you’ve left Dubai as there are no longer six lanes of motorway to choose from, only 3! The buildings are completely different, situated right next to the road, hundreds of tiny scummy looking local shops with several storey apartments on top of them. I think we need to explore Sharjah a bit more to get a proper feel for it, I’m not entirely sure this stretch of highway does it justice!

There are seven Emirates in total, Abu Dhabi is the capital, (it is NOT a country, as some American quiz app might have you think) then the remaining are Dubai (the largest city), Sharjah, Al Ain, Ajman, Fujairah, Umm-al-Quwain and Ras-al-Khaimah.

Al Ain – on the border of Oman and “technically in Abu Dhabi”, is the ‘historic’ Emirate, and has been inhabited for at least the past 4000 years.

Ajman – is the smallest Emirate, in fact, it is TINY when compared to the others. FACT: A lot of the Emirates have smaller parts of other Emirates inside them, known as exclaves. Looking at a map can be very confusing, Sharjah has a port which is over by Fujairah on the Omani coast!

Sharjah – is one of the more strict Emirates, and if you want an authentic experience of Emirati development, it’s here. Sharjah is currently where Dubai & Abu Dhabi were in the 1970s. It is a completely dry state, there are no alcohol shops, licenses are not issued, and bars/hotels cannot serve alcohol. Although through a quick Google I understand there are a couple of exceptions, but not quite as extensive exceptions as there are in other Emirates.

Umm-al-Quwain, Fujairah and Ras-al-Khaimah are a lot more relaxed. They have alcohol shops (no tax, hurrah!) dog-friendly beaches and are a lot less ‘busy’ than Dubai. Fujairah is home to the oldest mosque in the Emirates, built of mud. It was also the last Emirate to join the UAE, previously the six had been known as the Trucial States until 1971. Ras-al-Khaimah gets all the rain and borders the Omani exclave of Musandam (which is where the Stairway to Heaven is located.) Hopefully, we’ll head up there some day and I can write more about it!

If you want a bit more authenticity to your UAE experience, go to RAK. There are still people living in (slightly updated) traditional ways. Tents and huts, with goats, cows, oryx and sand gazelle all penned in. The roads are less pristine but don’t worry, they’re still lined with litter from passers-by. [Insert angry Sam face here]. The highlight had to be a bloke walking his camel down the road! (no pictures, wah!) RAK is right by the coast, and from a bit of research, I understand that most beaches are dog-friendly. I’d had a recommendation from a fellow Instagrammer that one just before Al Mejan Island was small but perfectly usable. We rocked up, off-roaded a bit and parked up. There were a few people camping on the edge of the road, but the tide was out so we made our way down to the sea. It was beautiful, but unfortunately (and I think this is going to become my biggest bugbear about the UAE) the littering was UNBELIEVABLE. Towels, bones, glass, food, plastic bags, flip flops, you name it, it was probably somewhere on that beach. There are huge bins lining the roadside, all of them empty. You have to walk past them to get to and from your car/the beach!! I picked up a few things, but I didn’t really feel like it made much of an impact. I reckon it would take 100 people an entire day to collect the rubbish. I do get sad about it because there isn’t a huge amount I can do (I won’t go into why here!) and it’s such a lovely country. 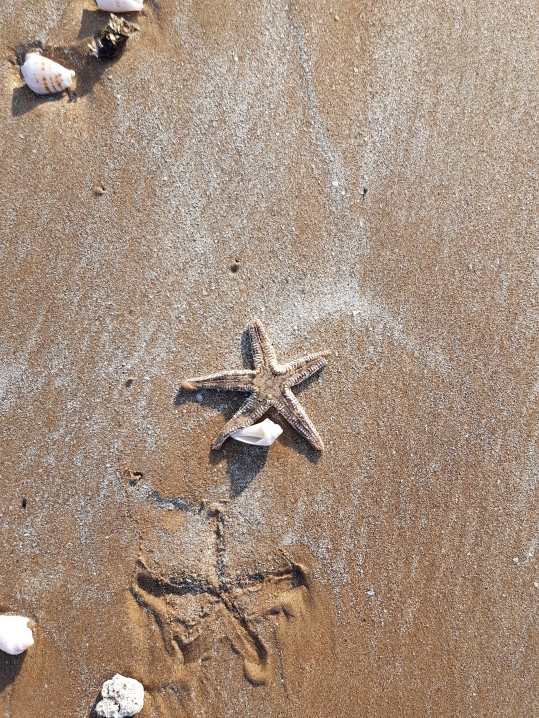 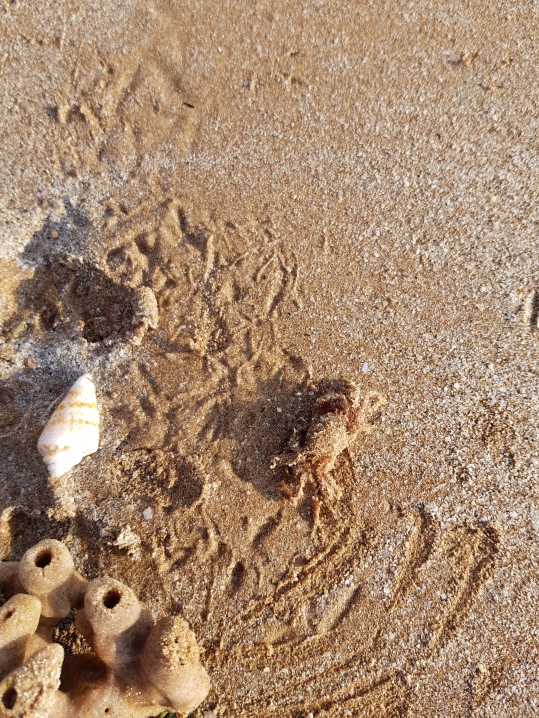 Failing that though we had a great walk just above the tide, collecting shells, finding starfish, coral, crabs and playing ball with Roxy. We then drove up a little further to Al Hamra Marina where there is a lovely coffee shop called Tocano Coffee, with decking overlooking the marina where you can sit and enjoy their slightly odd yet delightful coffees.

We then stumbled across Al Jazeerah beach tucked behind a seawall (I’m guessing the Persian Gulf gets a bit aggressive at times). Checking with security, dogs are allowed! So long as they don’t go in the sea. Once we got to the beach, it was easy to see why. It was super pretty, with a nice sandy area leading back to scrubland. Where the tide comes in its shell heavy, not good for paws! The beach also drops away sharply shortly after with a heavy roll to the waves so unless your pooch is a seasoned swimmer I would keep them out regardless! Also, there’s a little poop station with bags and a bin (there are loads of these in dog-friendly areas, it’s a shame some people still can’t be bothered with cleaning up after their pooch). 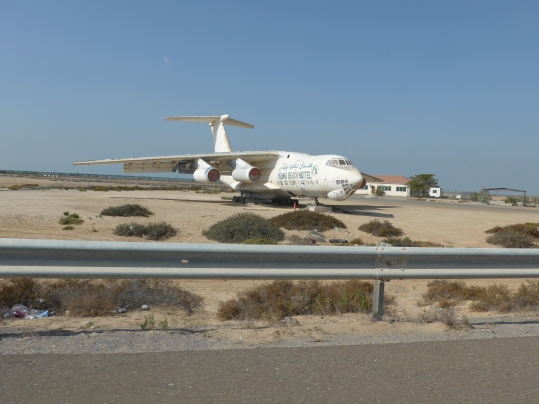 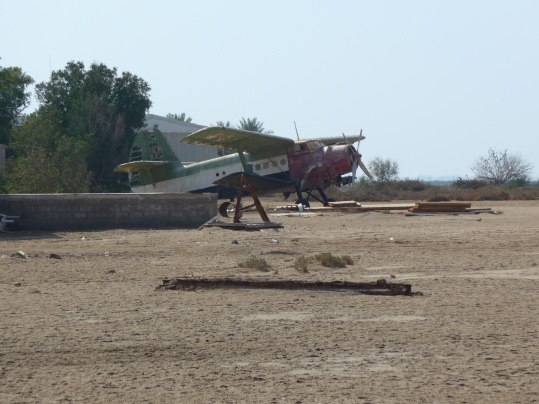 It was then onwards towards home. we’d heard tell that there was an alcohol shop in UAQ, the Barracuda. (Turns out there are a lot of alcohol shops about, you just have to be in the know!) I wanted to visit the Barracuda because it’s something I’ve heard talked about a lot on forums and websites prior to arriving in Dubai. The most exciting thing about it though (and not just the cheap booze!) is the abandoned airstrip as you turn down the entry road. There you’ll find two abandoned Russian planes left over from the Soviet Union. One is a propeller driven Antonov AN-2, the other a Ilyushin IL-76 cargo plane. I did a bit of digging, and the IL-76 was owned by Russian ‘merchant of death’ Viktor Bout, an arms dealer in the 90s, who used it to transport weapons to various civil wars in Africa. Now it’s a giant advert for the Palma Hotel, although allegedly even they aren’t sure how their hotel name ended up on the side of an abandoned cargo plane!

I’ve just discovered we missed several more abandoned places including an entire town and a palace. Rumours are ghosts drove them all away! I guess we’ll have to go back to RAK again!

All photography is copyright Sam Ellis @ yrnewfriendsam.com
Please don’t use without permission, if you ask, I’d be happy to share with credit.

Thriving on your own

Hey Did You Know I Write Books

So Then We Went
Mark My World

Hacking life while enjoying everything in between

Where is the ball?