My initial impressions of Dubai, I imagine, were much like everyone else’s. I was under the impression was that it was for the rich, a ‘Middle Eastern Vegas’ for those wishing to live a lavish throw away lifestyle, and that it hadn’t been in existence for all that long. And then I did some digging, some research, and found the opposite. Well, not quite. The above is still quite true, however, behind the facade is a rich tapestry of culture, history and vibrancy that can appeal to everyone.

Yes, it is very yellow. Much in the way we try to make our housing and motorways blend into the countryside, Dubai Municipality have done the same. Except they only have desert, not luscious rolling green hills.

Yes, it is hot. But I would say it’s not the same kind of hot that you get in the UK. It’s a much drier heat. Until the wind drops and the humidity kicks in. I’ve never walked outside before and had my glasses steam up – mark that on the ‘Dubai firsts’ list!

I was reminded whilst I was out there for four days earlier this month on a ‘reccy’ that you have to get out of the British mindset. We are very much programmed to be outside as soon as their is a hint of dry, warm weather and to ‘make the most of it as it won’t last long!’ But in Dubai, you have to reprogram yourself. You’ll spend all winter outside, making the most of the favourable weather, until from May onward it gets unbearable again and you become a hermit, moving from one A/C unit to another.

Yes, it is very modern (and very American, more on that later!) but it is steeped in a history that I’m sure very few people whom visit Dubai know about. They probably aren’t interested in knowing about it either! I was lucky enough to receive two copies of a brilliant book from two brilliant friends by a chap called David Millar. ‘Beyond Dubai – Seeking Lost Cities in the Emirates’ is a fantastic read if you want to know more about the backbone of Dubai, places to visit that are off the beaten track and a bit of history. David Millar was trying to convince his girlfriend to move out with him to Dubai but she was having none of it as it had no history. This book is his attempt to convince her otherwise!

What doesn’t help the underlying American tones is that there are American restaurants everywhere. We ate at a Five Guys and the Cheesecake Factory. (I figured it was best to get these out the way whilst we were still considered tourists, we’ll go authentic when we become residents!) There were also four Tim Horton’s off the Sheikh Zayed Road (which, incidentally is 12 lanes wide in some places!!!) And whilst comparing the prices of various groceries in Carrefour I noticed the most popular washing powder brand was Tide. I would say that it’s very different to landing in New York, where everywhere you visit seems familiar from the TV and Cinema screens. I had nothing to base Dubai on aside from the preconceptions mentioned in the first paragraph, therefore the American brands give you a false sense of security in a country which values its culture and religion highly and is definitely not American!

The Dubai Mall was a great experience, one which I hope not to repeat too soon! Whilst Mark worked for a few hours I wandered down the many floors, lanes and districts within the Mall. There’s the ‘Fashion Walk’ where Stella McCartney, Tom Ford and Alexander McQueen take centre stage whilst the floor is carpeted and the ceiling adorned with hundreds of paper butterflies. It’s a strangely quiet section of the Mall, considering it’s supposed to be the land of riches, a lot of people were just hanging out using the comfy seating (like me!) rather than spending time in the shops. My favourite section was ‘The Village’ which had a variety of shops and a ceiling of parasols, it also led to ‘Denim District’, I’m sure you can figure out what shops were down there!

I visited the huge Apple store, with it’s infamous rotating wall of glass to enable cooling and heating properties depending on the season. It didn’t look much like a store, more a place for people to hang out, with the odd Genius wandering around offering help whether wanted or not. Out the back of the Apple store you can get a pretty decent view of the Dubai Fountain and the Burj Khalifa. Unfortunately, the Apple store is on the 2nd floor, so getting anywhere near the edge to get a decent photo of the Burj was beyond my bravery. (Note to self: must conquer fear of heights in Dubai!!) 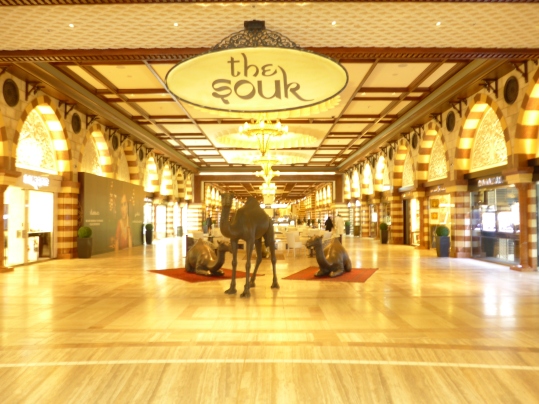 what it says on the tin

The Souk section of the Mall is disappointing, in that it’s lit like a Souk, but houses shops that are far beyond a normal person’s budget. I’m looking forward to going back and heading down to the traditional Souk’s around the creek alongside visiting the ‘Old Dubai’ of Bastakiya and the Ras al Khor wildlife sanctuary.

Dubai at night is amazing, much like NYC all the buildings are lit up, and walking near the creek all the Dhows (traditional wooden boats) are lit up as they make their way up and down stream. We opted to take the 15 minute walk to the Cheesecake Factory from our hotel (and yes, the portions are American sized, even the cappuccino came in a dessert bowl sized cup.) It wasn’t an unpleasant walk, I would say being outside in Dubai is a bit like being on the London Underground in summer when the heating is stuck on, but without the sweat. (If you walk slowly). However, when we left the restaurant the wind had dropped considerably, and I had my first case of steamed up glasses from walking outside. The breeze dropping had caused the humidity to rise, and the walk home was pretty unbearable. (Granted, we could have got a taxi, but we’re still British and tourists at the moment, so we were being tight!)

I would advise everyone to visit Dubai at least once (and not in the summer) not just because we are going out to live there, but because I had no idea of the history behind it, and that underneath the glamorous, glitzy surface it is going to be possible to live a normal life, shop at Marks & Sparks and not get carried away. I’m also excited at visiting all the locations listed in David Millar’s book, and all the countries that are within a much closer distance than they were from the UK. I will miss green though.

The song quoted in the title is ‘Arabian Sands’ by The Coral. A band I have not listened to in too long! Unfortunately this is from their 3rd album where I started to lose interest in them. Particularly after losing the sound of Bill Ryder-Jones guitar.

All photography is copyright Sam Ellis @ yrnewfriendsam.com
Please don’t use without permission, if you ask, I’d be happy to share with credit.

Thriving on your own

The Reputation of a Student

Oliver would be proud

Hey Did You Know I Write Books

So Then We Went
Mark My World

Hacking life while enjoying everything in between

Where is the ball?